Venice at the peak of the crisis: How to get out of ultra-dependence on tourism?

With humans away, whales play off the coast of southern France09 April 2020

Venice at the peak of the crisis: How to get out of ultra-dependence on tourism? 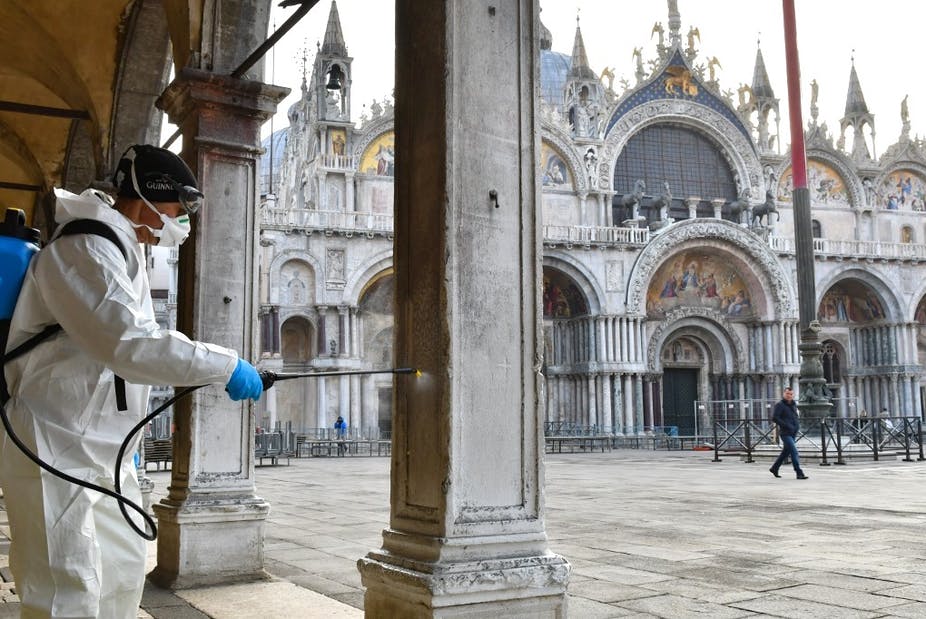 It is the most unique city in the world, a city in proportion to man, which brings together water and art, that is to say nature and culture. Silent because without a car and passable on foot and by boat, it leaves humans at the center, in beauty and harmony.

It is the result of the stubbornness and tenacity of the man who, over the centuries, has succeeded in transforming a hostile and marshy environment, composed of an archipelago of 118 small islands, into a city located on the water, a masterpiece of town planning, unique and inimitable. Venice has always fascinated people to the point of becoming the universal superstar destination.

The crisis has emptied the city of all its tourists, who will not return until after its settlement in their countries and in Europe. The impact on Venice’s economy, already damaged by the high tide last fall, is catastrophic. The fact that, paradoxically, the crisis restores the image of a calm city where life is good, completely eliminating the problems relating to the action of the waves, pollution and mass tourism, does not change anything to heavy losses inflicted on it, the vacuum destroying many activities.

The Serene is no longer so: fragile, it has long been too exposed to various threats that have damaged and endanger it. These seemingly natural dangers are actually exacerbated by human intervention: subsidence, high tides (acqua alta) and wave action. Venice has sagged 33 cm in recent decades due to the extraction of methane in the basement and water in the groundwater for industrial purposes.

The gradual rise in mean sea level and the works carried out in the lagoon have aggravated the high tides which regularly submerge the streets, as in autumn for 45 days with a water level reaching 187 cm above the sea level. Result, several hundred million euros in damage – museums, monuments, churches, shops, homes, warehouses, infrastructure – including 4 million euros for Saint Mark’s Basilica alone, and a fall of 40% of hotel reservations.

The “disneyfication” of the city

The action of the waves, caused by motor boats for the transport of goods and passengers and by the presence of cruise ships, incessantly degrades the foundations of the city, undermining the stability of the buildings, in addition to destroying the he ecosystem of the lagoon by the erosion of grassy islets submerged at high tide and discovered at ebb tide, as well as shoals.

These same boats pollute water and air and threaten the integrity of traditional rowing and sailing boats as well as the safety of their crew and passengers. In addition to disfiguring Venice, cruise ships that take the Giudecca Canal, too close to the city, also endanger its integrity, as evidenced by the collision of one of them with the shore of San Basilio in June 2019.

The “overtourism”, with a flow of around 30 million visitors per year for an island of barely 51,000 residents and a process of “disneyfication” of the city sees a gradual substitution of its traditional and local shops by shops intended for tourism.

This trend, amplified by the proliferation of hotels, guesthouses, short-term rental apartments and cheap hostels, has also made the city inaccessible to young Venetian and foreign workers or students. Generally speaking, this flow creates a massive exodus of residents.

For the past 50 years, the problems listed above have been managed by the numerous successive administrations using a “physiocratic” approach (let go, let go). In some cases, the interventions have even worsened the situation: the system of mobile dikes called Mose, which should have protected Venice from the high tides, a project approved in the 1980s still does not work despite the some 6 billion euros already sunk.

The widening and excavation of the passes has increased the speed of the incoming and outgoing tidal currents, accelerating the erosion process of the barene, vital for the lagoon ecosystem.
If the situation were modeled using game theory, it would appear that the interaction between the decisions of individuals – motivated by the pursuit of personal interests – produces a “non-optimal” result for the system. It is therefore crucial that a public decision-maker, aiming for the general interest, actively coordinate the city’s government policies with a long-term perspective.
Rediscover the artisanal and creative identity

To restore Venice to its inhabitants and to the whole world, creative solutions involve restoring its fundamental heritage characteristics. The city can notably draw inspiration from what it was in the past, at the center of the Western world: a central place for human beings, governed by innovative social and cultural engineering. A diversification of production activities is necessary to get out of the ultra-dependence on tourism and give an authentic sense to the city.

First of all, the exceptional craftsmanship developed over the centuries that barely survives today can be supported by incentives for production companies. The Tessitoria Luigi Bevilacqua weaving workshop, the Valese foundry, the craftsmen of the El Felze association, the shipbuilding of traditional boats of modest size with its master marine carpenters, the hundreds of craftsmen scattered throughout Venice and on its islands, experts in the art of working glass, leather, paper, precious metals, etc., are just a few examples of this cluster of intangible heritage to be revitalized.
These treasures could be valued on the one hand, by an effective housing policy and, on the other hand, by the regeneration of unique industrial spaces such as the Arsenal in Venice. The shipyard, which covers 15% of the city’s surface, for example, is still only partially used during the Venice Biennale, the major biennial meeting of the contemporary art market.

Another area of development concerns the establishment of a center of excellence to ensure that Venice, an important university city with the Università Ca’Foscari Venezia and the Istituto Universitario di Architettura di Venezia, once again becomes the home of talent creatives who welcomed and saw the birth of famous architects (Sansovino), painters (Tintoretto), artists (Leonardo da Vinci) or scientists (Galileo), offering them the best creative environment of the time.

Favoring a sustainable ecological shift from Venice and its lagoon has become an emergency. Renewed attention to agricultural production would enhance local entrepreneurship, supporting the vocation of the hinterland and islands like Sant’Erasmo and Vignole. This shift would strengthen Venetian trade and favor traditional centers such as the Rialto market in addition to encouraging disintermediation and distribution methods compatible with the city and its traditions.

In addition, a set of practical measures could apply, for example, to all motor boats for the transport of goods and people with the aim of reducing the action of waves and the ambient and noise pollution protection of the inhabitants, the city and its ecosystem.

The solutions put forward by the various citizens’ committees and associations propose to redesign the hulls of the boats, to replace the diesel engines with electric motors, to install GPS on the boats to monitor their speed, to increase the measures of electronic control of traffic and pollution, to modify the route of cruise ships to prohibit them from entering the Venice lagoon.

To protect Venice from high tides, studies suggest injecting water into the basement to restore the level of the city and curb its subsidence, while others suggest closing it permanently the entrances to the lagoon and to build hydraulic pumps responsible for exchanging water between the Adriatic Sea and the lagoon.

It is about rethinking the development of sustainable and informed tourism, which values, for example, the biodiversity of its lagoon habitat, its agrifood traditions as well as the many areas of “hidden Venice”, often overlooked by tourists. Finally, the city would benefit from regulating its tourist flow by smoothing the demand curve with a variable tourist tax depending on the periods of use, thus making it possible to finance the projects set out above.