Clean canals, dolphins in the ports. The impact of the coronavirus on the air and waters of Italy

What is sustainable tourism and why do we need it?28 February 2020Next

Dolphins in the bay of Cartagena, the other effect of the coronavirus21 March 2020

Clean canals, dolphins in the ports. The impact of the coronavirus on the air and waters of Italy 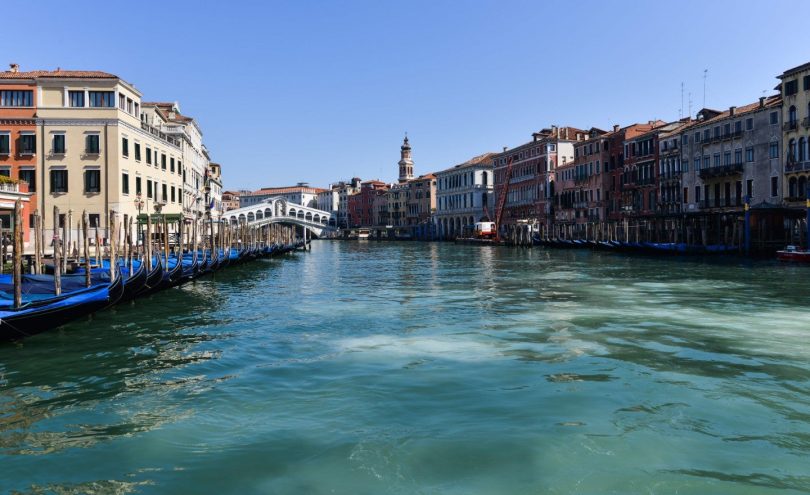 It is one of the most widely used and shared stories about Chernobyl: when humans left the Exclusion Area due to high levels of radioactivity, flora and fauna recovered what was once theirs. An environmental nursery fostered by the absence of population. On a small scale and in very specific corners, something similar is happening because of the coronavirus.

Clean water. As in the canals of Venice, tinged with an aquamarine green, transparent in their lower depths, clean enough for us to observe the flow of fish and birds from the surface. Veneto is one of the regions hit hardest by the epidemic, and Venice has become a ghost town in the past month.

Without tourists, without barges, without people, the waters have calmed down. They look cleaner, fruit of the absence of activity.

Figures. The cancellation of Carnival, one of the most massive events of the year that shoots hotel occupancy rates above 95%, and the government decree “I stay home” have sunk tourism. The mayor of Venice calculates that the city, dedicated exclusively to industry, has already lost € 1 billion. Hence the emptying of its streets and the crystalline aspect of its channels, unpublished.

Nature. The example of Venice is repeated in other corners of Italy. In Cagliari, the largest city in Sardinia, various residents have sighted dolphins. A unique print. The docks of the port are usually full of industrial ships and ferries (the island enjoys great tourist activity all year round). Without it, the parades have appeared.

Another viralized image over the past few days shows a duck couple sailing the turquoise waters of the Trevi Fountain, one of the busiest spots in Rome. Even in Japan the deer of Nara have entered where once there were only humans. In the subway, in search of food now elusive and previously provided by tourists.

Clean Air. The closure of Italy has had a direct impact on the country’s waters and air. This video produced by the European Space Agency shows how pollution levels have plummeted in recent weeks. Northern Italy is one of the European regions most affected by atmospheric pollution. The country’s massive quarantine has caused its toxic haze to fade away.

Also in China. It is something that we could observe in Wuhan and other Chinese cities more than a month ago. The massive Hubei quarantine caused its residents to discover something unusual in China: a blue sky. The reduction in air traffic, the stoppage of industry and the economic slowdown have caused CO2 levels to drop dramatically.