STOREM Project kicks off with partner meeting in Barbados16 February 2019 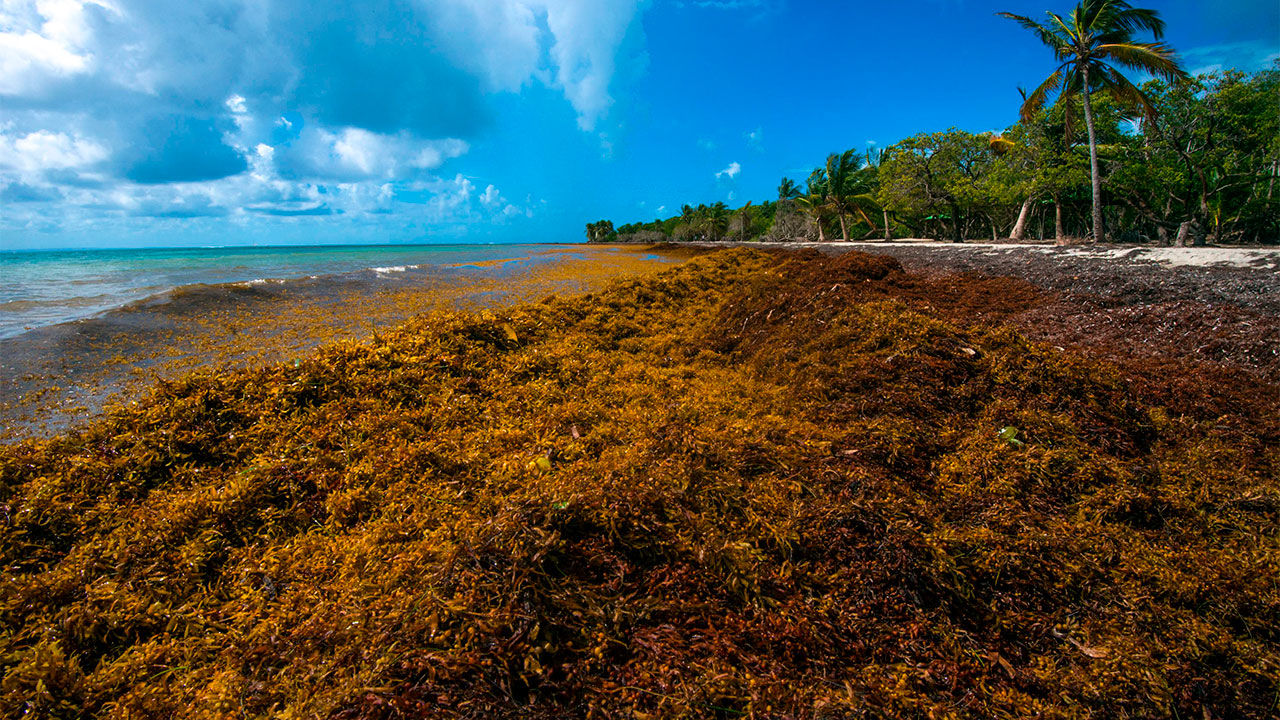 In retrospect, 2011 was just the first wave. That year, massive rafts of Sargassum—a brown seaweed that lives in the open ocean—washed up on beaches across the Caribbean, trapping sea turtles and filling the air with the stench of rotting eggs. “It presented immense challenges,” says Hazel Oxenford, a fisheries biologist at The University of the West Indies in Cave Hill, Barbados. Before then, beachgoers had sometimes noticed “little drifty bits on the tideline,” but the 2011 deluge of seaweed was unprecedented, she says, piling up meters thick in places. “We’d never seen it before.”

Locals hoped the episode, a blow to tourism and fisheries, was a one-off. But a few years later “it came back worse,” Oxenford says. Now, the Caribbean is bracing for what could be the mother of all seaweed invasions, with satellite observations warning of record-setting Sargassum ​blooms and seaweed already swamping beaches. The Barbados government declared a national emergency on 7 June. “It’s catastrophic,” says James Franks, a marine biologist at The University of Southern Mississippi in Ocean Springs, who is one of many scientists trying to explain why a part of the ocean that was once seaweed-free is now rife with Sargassum. “Right now there’s [another] huge mass impacting Puerto Rico, and that’s the last thing they need.”

Jim Gower, a remote-sensing expert with Fisheries and Oceans Canada who is based in Sidney, British Columbia, and his colleagues looked for spots on the ocean’s surface that reflected unusual amounts of near-infrared light, a part of the spectrum that plants don’t harvest. Data from May 2011 showed a huge patch of floating plants, presumably Sargassum, off the coast of Brazil—far to the south of its normal habitat. By September, it stretched from the Caribbean all the way to the coast of Africa, the team reported in 2013.

To confirm that the Sargassum fouling Caribbean beaches in 2011 came from the tropical Atlantic, east of Brazil, Franks and his colleagues traced the likely path of seaweed masses backward through time. First, they compiled records of locations where Sargassum came ashore. Then, using information about surface currents, they calculated its likely source. “Invariably, in all of those instances, it tracked back to the [tropical] region,” says Franks, who reported the findings in 2016. “None of it ever tracked northward into the Sargasso Sea.”

Since 2011, tropical Sargassum blooms have recurred nearly every year, satellite imagery showed. The new source region is encircled by currents running clockwise from South America to Africa and back again. From January to May, that loop breaks down and westward flows sweep Sargassum up the Brazilian coast toward the Caribbean. “All along the way, the Sargassum is blooming and growing,” Franks says.

Yet in satellite data prior to 2011, the region is largely free of seaweed, says Chuanmin Hu, an oceanographer at the University of South Florida in St. Petersburg and the senior author of a 2016 study that examined satellite data from 2000 to 2015. That sharpens the mystery of the sudden proliferation. “Nobody has a definite answer,” Hu says. Nutrient inputs from the Amazon River, which discharges into the ocean around where blooms were first spotted, may have stimulated Sargassum growth. But other factors, including changes in ocean currents and increased iron deposition from airborne dust, are equally plausible. It’s all “educated speculation,” Hu says.

Some clues may come from the seaweed itself. Most of the Sargassum that’s blooming off the coast of Brazil has broader blades than the weed in the Sargasso Sea, says Amy Siuda, a biological oceanographer at Eckerd College in St. Petersburg, Florida, who has examined hundreds of samples. Siuda is currently working with colleagues to figure out if the broad-blade form—which historically was rare in tropical areas—is a separate species. Figuring out the conditions that promote its growth could be key to explaining the proliferation, she says.

In the meantime, the Caribbean is struggling to cope as yearly bouts of Sargassum become “the new normal,” says Iris Monnereau, a regional project coordinator for the Food and Agriculture Organization of the United Nations in Christ Church, Barbados. She’s particularly worried about this year, noting that the blooms visible in satellite imagery dwarf those of previous years. “You can’t solve the problem; you can’t put up a wall or anything,” she says. “It’s difficult to go forward.”